Winds of the Ominous Moon

Winds of the Ominous Moon

Wind of the Night

Reiya Cluster
Winds of the Ominous Moon is the nineteenth Japanese and eighteenth English expansion in the Trading Card Game.

At long last, the Time Spinning Witch has appeared in our world. With the last of her power unsealed, Reiya heads to the decisive battle with unwavering determination. With that, a breeze from the future blows by.

130 different cards in total. Each box comes with 36 packs with 10 cards each. Additionally, each box includes 35 separate cards that cannot be found in the booster packs:: 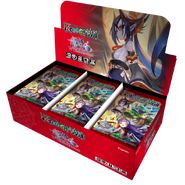