The Strangers of New Valhalla

Awakening of the Ancients

New Valhalla Cluster
The Strangers of New Valhalla is the twenty first Japanese and twentieth English expansion in the Trading Card Game.

Continuing the design philosophy from the first set, rulers will not be included within New Valhalla's second set "The Strangers of New Valhalla". The card distribution rate will also take after the first set, being easier for players to collect four copies (a playset) of necessary cards.

As for characters, everybody's beloved Alice will be making a long-awaited reappearance. Also making a reappearance will be the newly unsealed Athenia, a character undoubtedly familiar to long-time veterans of Force of Will. What battles lie in wait for these two girls?[1] 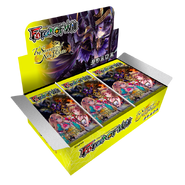 Box Design
Add a photo to this gallery

Clusters
Valhalla Cluster
The Dawn of Valhalla
The War of Valhalla
The Shaft of Light of Valhalla
Grimm Cluster
The Crimson Moon's Fairy Tale
The Castle of Heaven and The Two Towers
The Moon Priestess Returns
The Millennia of Ages
Alice Cluster
The Seven Kings of the Lands
The Twilight Wanderer
The Moonlit Savior
Battle for Attoractia
Lapis Cluster
The End of Fates
Legacy Lost
Return of the Dragon Emperor
Echoes of the New World
Reiya Cluster
Ancient Nights
Advent of the Demon King
The Time Spinning Witch
Winds of the Ominous Moon
New Valhalla Cluster
New Dawn Rises
The Strangers of New Valhalla
Promotional
Promo Cards
Retrieved from "https://force-of-will-tcg.fandom.com/wiki/The_Strangers_of_New_Valhalla?oldid=41199"
Community content is available under CC-BY-SA unless otherwise noted.