Force of Will TCG Wiki
Register
Don't have an account?
Sign In
Advertisement
in: Card Types, Spell 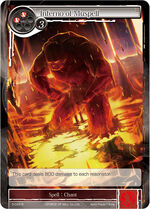 (Did you mean Normal Spell or Summon Spell?)

Spells are the magic cards in Force of Will, which players can cast to support their Resonators with various effects or hinder their opponent's Resonators.

Spell cards come in a variety of types and effects. A spell takes effect when it is cast (after being put into the Chase Area), and is put into the Graveyard immediately after its effect resolves. There are 3 types of spells:

These can be cast only during your turn, while there are no cards or abilities in the Chase Area.

These cards can be cast on your opponent's turn as well as your own, and can be used even if there are cards or abilities in the Chase Area.

These cards can be played from your hand when their [Trigger] condition is met, following the same rules as Instant cards. Alternatively, they can be set (placed face-down) into your standby area by paying

during your turn, while there are no cards or abilities in the Chase Area. On any turn after a card is set in your standby area, if the card's [Trigger] condition is met, you may cast the card by turning it face up. You do not need to pay any further cost or meet any further requirements to cast a card from your standby area -- you just need to meet its [Trigger] condition.