Force of Will TCG Wiki
Register
Don't have an account?
Sign In
Advertisement
in: Card Types, Magic Stone 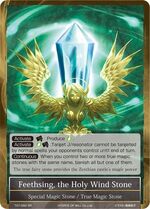 Magic Stones are cards that produce Will.

They come in 5 different attributes: Light

Magic Stones make up their own deck, known as the Magic Stone Deck, and do not occupy space in the Main Deck.

A Magic Stone is produced by putting your Ruler into a Rest state during the Main Phase.

There are three types of Magic Stones:

Will of a specific attribute is then produced by tapping (resting) a Magic Stone of the same attribute. (e.g. resting a Flame Magic Stone will produce 1 Flame WIll).

Unused Will does not carry over to the next turn.