At that moment, an enormous amount of energy shook the arena. The arena, which had not collapsed even in the battle of the gods, was shattered, and from within, a gigantic monster emerged.

It was the legendary monster, Typhon.

The figure was even uglier than all of the unnatural monsters of the demonic world. Its entire body was mechanized, and its body fluids smelled of iron and oil. Altered and eroded by Solaris, the world of Gears, it dominated this world as a monster of endless destruction. Not as the final messenger of the "duel" on Loki's side, but as a merciless invader of what is not of this world.

Against this, Alice and her team had to send a representative, as that was the rule. If this were to end in a victory for Typhon, the power to fuse the worlds would be given to those of other worlds. Even the gods could not stop it.

But Alice was aghast at the sight. She knew, because she had the power of Zeus, that the monster that had once existed, Typhon, had a power unmatched by any other. This was a battle she could not win.

"I'll get that thing under control. I'll need back the power I lent you for that, and I'll take everyone else's power too. I thought that the power of God was too strong for this world. So I will take it over, and we will fight this battle. Though it may be endless, it will also bind that "monster" within the constraints of this world. That is all we can do now. You will lose God’s power by offering it to me, but you will remain powerful enough to protect this world. I do not know what will happen to this world or to the parallel worlds, but there is plenty of time to think about it."

The golden bird transformed into Zeus and headed for the "duel" to fight Typhon.

It was the beginning of the battle that would later be known as the True Typhonomachy. 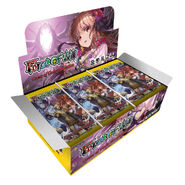