Duel Cluster
Game of Gods is the thirty first English expansion in the Trading Card Game.

While Faria and the others were heading to the Demonic World to fight, a new threat to Re-Earth was arising. New Valhalla was still in a stalemate and Loki was looking for a new place to fight. And her target was Re-Earth, reincarnated by the power of Zeus (Kaguya's Time Spinning). Re-Earth is also the source of Alice’ s and Kaguya's power, and Loki's goal is to absorb that power.

When the Demonic World is liberated by Faria and her team, Loki does not help Satan, but instigates Shiva to attack Re-Earth. However, Oborozuki notices Loki's plot and tries to stop it with Nyarlathotep's help.

The ultimate battle between the high gods begins, involving tales and villains from all dimensions.

In this story, Shiva's world and Re-Earth (Zeus's world) clash, but Ma'at (Nyarlathotep's world and formerly Atum's world) intervenes, forcing all involved parties to duel in the arena of Ma'at, where Nyarlathotep now rules as Game Master.

Tales and Villains begin their duels under the strict rules of Nyarlathotep's world. 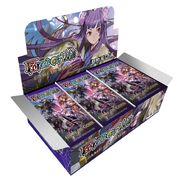