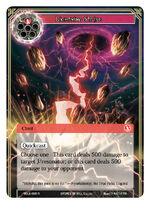 Chant is the card type set to replace Spell : Chant. Chants are introduced in the Lapis Cluster.

Chants are the magic cards in Force of Will. They provide a varity of effects, such as altering resonators stats/abilities, drawing cards or dealing damage to players/resonators.

Previously Chants had the card type Spell : Chant and had a number of sub-types (such as Spell : Chant - Instant). With the release of the Lapis Cluster, Spell : Chants were replaced by Chants and no longer have sub-types. Instead, Chants now have keywords to identify additional rules that apply to the Chant, such as Quickcast.

Unless affected by other rules, Chants can only be played during your turn while you have have an available play action.

Quickcast - Chant can be played during a priority sequence, such as during your opponents turn.
Remnant - You may play this card from your graveyard. If you do, remove it from the game instead of putting it anywhere else any time it would leave the chase.

Some cards refer to a specific subcategory of Chant. These subcategories can be found in parenthesis next to the word "Chant" on the cards.

Subcategories do not actually affect the usage of the card itself, but do affect how they interact with other cards. Most often, cards that produce will or search for Chants will limit applicable targets to a specific subcategory.